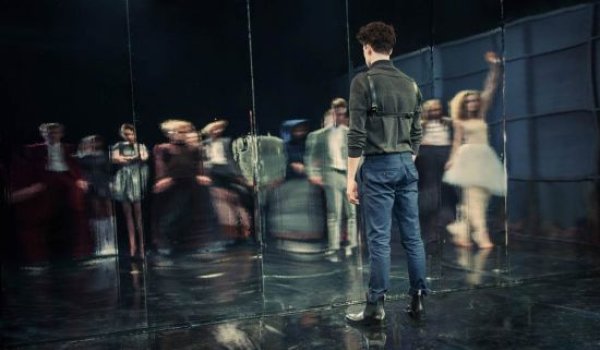 Since its conception in 1946, the department has held onto the tradition of offering students an integrated program that emphasises close co-operation among acting, directing, dramaturgy and stage design. The program curriculum, based on the traditional theatrical education that has shaped European classical drama over the past two and a half thousand years, is constantly being developed and modifi ed to respond to modern theatre movements. This program offers students the opportunity to achieve a deeper theoretical understanding of directing as well as acquire the creative and managerial skills necessary to take advantage of the full-range of expressive devices in mounting a full-scale theatrical performance. They conclude their studies by producing a performance at the school theatre, DISK.

Studies focus on the following areas:

Creative Maturation – Students will develop and release their imaginations departing from their personal and particular perspective while actualizing modern approaches to rehearsing and stage creation including improvisation.

Conceptual Actualization – Students will master the ability of both independent and team-work in preparing a mise-en-scene. This means learning how to select a dramatic text, defi ne directorial intent, develop a dramaturgical conception, prepare the production, and outline strategies for the rehearsal process.

Developing Practical Skills – Students will actively collaborate with stage design and dramaturgy students as well as sound designers. They will learn basic strategies and skills for working with actors and what it means to lead a production team: timetabling, delegating tasks, and maintaining fl uent communication amongst team members. Students will discover the importance of taking into account their colleagues’ ideas and themes and what it means to work within the specifi cities of a theatrical context. In effect, they will learn to interconnect the individual elements of a staged work in a meaningful way through a live communicative medium and understand the process of searching for form and developing chosen themes. This will culminate in a demanding mise-enscene taking full advantage of stage design, music, sound and lights to express content through form. Theoretical Analysis – Students will hone their analytic skills so they can refl ect on basic problems and questions connected with the genesis and development of dramatic art and analyze specifi c examples of contemporary stage practice.

Doc. Jan Burian is Chair of the department. He has been teaching directing at DAMU since 1990. He has been director of The J.K. Tyla Theatre in Pilsen since 1995. He is also chair of the Association of Professional Theatres in the Czech Republic, and Director of the International Festival Theatre. He has directed more than seventy professional theatre productions and six operas. He is particularly interested in the work of Shakespeare, Chekhov, Ibsen, O’Neill, Bulgakov, Andrejev and Havel.

Doc. Jakub Korčák has been teaching directing at DAMU since 1990. He was the Director of Dramatic Theatre at the Workers‘ Theatre in Zlin and Mahen’s Theatre in Brno. He did an internship at the Gitisa in Moscow under Efros. As both a director and teacher, he is interested in the work of Shakespeare, Moliere, Pirandello, Ibsen, Chekhov and Topol.

Mgr. Jana Kudláčková has been working at the department since 1990 as a teacher of dramaturgy. She has worked as a dramaturge on over 150 professional theatre productions, including at The J. K. Tyla Theatre in Pilsen and the National Theatre in Prague. She has written a number of adaptations of classic works: Shakespeare, Aeschylus, Sophocles, O’Neill, Chekhov, Dostoevsky and Beckett. She specializes in comedy and farce. She is also interested in discovering foreign authors to present in the Czech Republic.