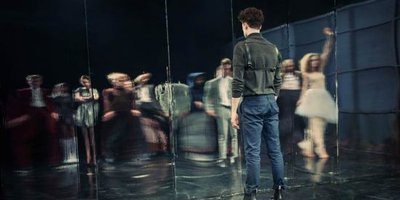 The programme in acting is based on a refined and tested instructional methodology which is built on a unique system of cooperation between students and pedagogues according to the model of a small professional repertory theatre. From the beginning, students are led to intensive team cooperation and become acquainted - on both theoretical and practical levels - with the individual professions necessary for the creation of a collective theatrical work. They undergo the cycle of historical and theoretical training common to all fields at DAMU, but are also introduced to the issues of the other theatrical fields. From the beginning, attention is devoted systematically to mastering speech, singing and movement - all disciplines necessary for an actor`s professional preparation for dramatic theatre, but also for other types of theatre (musical theatre, motion theatre) as well as for various media (radio, film, television, dubbing). The point of departure and common denominator of all subjects is theatricality as the quality which provides the impulses and prerequisites for an actor to create a dramatic character in any extent or genre. A student in the field of acting has the opportunity to undergo a range of courses taught by foreign pedagogues, in particular from the Moscow Art Theatre, who are regularly invited by the Department of Dramatic Theatre. Also, a graduate can do various internships at foreign theatre schools (in London, Moscow, Berlin, etc.).

A graduate in the field of acting is thoroughly and versatilely prepared for professional acting work in the most diverse types of theatres, especially in a large dramatic theatre based on the interpretation of dramatic literature, but also in artistic projects which transgress standard theatrical productions with their innovative poetics. Grounding in singing and movement also enables the graduate (depending on the nature and level of his/her talent) to apply his/her skills in musical and movement theatre. In any case, he/she should be able to master radio and film acting.