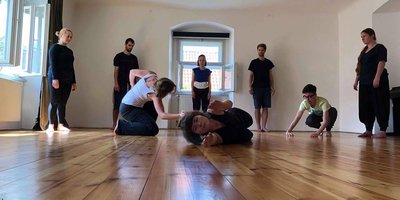 Department of Authorial Creativity and Pedagogy

The study of acting not in the classical sense of interpreting an assigned role, but in the authorial sense. The student is guided to become a creative personality capable of guaranteeing her/his authorial work. The student personally presents and develops the work in a dialogue with the environment into which it enters. Authorship is not understood as a mere production of artefacts but as any original creative activity which occurs in a public space and which in consequence - intentionally or otherwise - transforms this space; the individual should thus warrant personally for his/her actions and bear the responsibility. This requires a specific condition because existing in a public space places significant psychosomatic demands on every person. For this reason, the study of acting with a focus on authorial creation and pedagogy is based on acquiring experience in the main dimensions of human expression: education in voice, speech, movement and dialogical conduct. The theoretical subjects are selected so as to provide reflection and a broader horizon to these skills, or rather abilities.

Because the goal of the programme is to cultivate a self-confident, creative personality, the graduates` profiles and employment can be - and tend to be - very diverse. Most commonly, graduates apply their skills in so-called assisting and pedagogical professions of variegated fields, but also as authors of their own projects of a theatrical, visual, literary or other nature, or work in the media (moderators, script writers, TV/radio etc.).