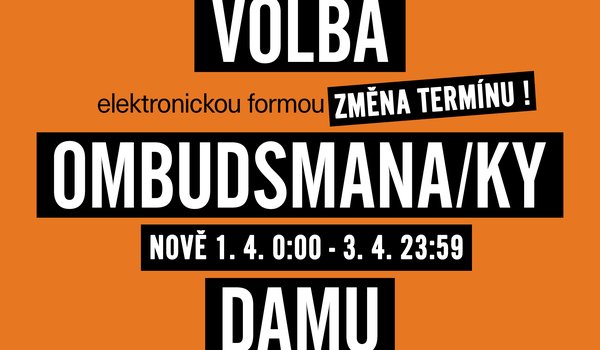 ELECTION OF THE OMBUDSMAN of DAMU

Due to an error on the voting ballot, the election will be held on an alternate date: April 1 - April 3, 2022.

Election of the ombudsman of DAMU

We are extremely sorry, but due to a misspelling in the name of one of the candidates for the position of DAMU Ombudsman, we are forced to CANCEL THE CURRENTLY ONGOING ELECTION. As it stands, the vote is invalid.

!! WE WILL IMMEDIATELY REPEAT THE ELECTION ON AN ALTERNATIVE DATE !!!

Attention!: WE ASK ALL THOSE WHO HAVE SO FAR SENT IN THEIR VOTES TO REPEAT THE ELECTION AT THE ABOVE TIME.

We are very sorry for the complications. We also thank you in advance for your understanding of the matter and your patience in voting again.

The Ombudsman is elected by academic staff recruited on the basis of a selection procedure, students enrolled in a study programme run by the DAMU and other employees in an employment relationship with the DAMU (hereinafter referred to as "THP staff").

The election commission appointed by the Dean of the DAMU on 12 January 2022 supervises the proper conduct of the election and announces the results of the election, ensuring equal and direct voting rights by electronic secret ballot. RNDr. Alice Koubová, PhD. (chairperson), doc. Mgr. Radek Marušák and BcA. Vojtěch Klinger.

Annoucing of the results of the Election of the DAMU Ombudsman

Announcement of the election of the DAMU Ombudsman